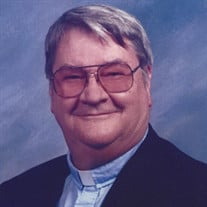 Paul Augustus Westberg, age 86, of Fayetteville, Arkansas died on October 30, 2021. He was born on February 9, 1935, to Oliver and Edith Pritz Westberg in Kirkwood, Missouri. He was preceded in death by his parents, two sisters Grace Doty and Charlotte Malatky, one brother Dan Westberg, and his former wife Marlene Christensen Westberg. He is survived by Martha Westberg, his wife of 28 years, three sons Dan (Lisa) Westberg, Mark (Amy) Westberg, and Scott (Pamela) Westberg, and five grandchildren - Stephen, Stephanie, Megan, Sierra, and Erin. Paul was a big man in all ways and his booming voice could easily capture the attention of a room. He graduated from UC Davis with a B.S. in Vegetable Crop Production; he always maintained a love of gardening throughout his life and supplied an excess of tomatoes to whoever would take them. Following his undergrad studies, Paul proudly served as a Lieutenant in the US Army Missile Corps. Stories of his Army exploits enthralled his sons and their friends as they grew up. There were many times that their Mother would leave the dinner table as he was reciting one of his stories that she felt was unfit for the table. Paul then attended San Francisco Theological Seminary and, upon graduation, served in churches in New Mexico and Oklahoma. Paul finished his educational pursuits with a M.S. in Psychology at Oklahoma State University. In 1970 the family moved to Fayetteville, Arkansas where Paul spent most of his career as a Rehabilitation Vocational Counselor with the State. He later worked as a Rehabilitation Teacher for the Blind. During all this time, Paul served as a minister in a number of churches including Christian Life Cathedral. He had a true gift for delivering a sermon that all could relate to in their own lives. As the youngest of 5, the love of his siblings and parents were common themes, especially the hugs that he got from his mother. Paul and Martha were married in 1993. Together, they enjoyed traveling the world on various mission trips. Paul was lovingly known as Santa Claus to orphans in Romania and Papa Chickens to his grandchildren from his life on the farm. Paul was passionate about life and helping others. The Food Committee at Butterfield Trail Village will likely never have a more dedicated member. He was proud of his sickness reserve and always said that he could outlast his skinny friends by more than a month in any potential famine. He often would say that he was waiting for the Lord to “Blow the Trumpet.” We have no doubt that he heard the final call and is singing the Glory of God for all to hear! A private family memorial service will be held. A public reception will be held at Butterfield Trail Village, Thursday, November 4, at 2:00 p.m. Only vaccinated guest will be allowed at Butterfield. Cremation with urn placement will be at Fayetteville National Cemetery at a later date.

Paul Augustus Westberg, age 86, of Fayetteville, Arkansas died on October 30, 2021. He was born on February 9, 1935, to Oliver and Edith Pritz Westberg in Kirkwood, Missouri. He was preceded in death by his parents, two sisters Grace Doty and... View Obituary & Service Information

The family of Paul Augustus Westberg created this Life Tributes page to make it easy to share your memories.

Send flowers to the Westberg family.