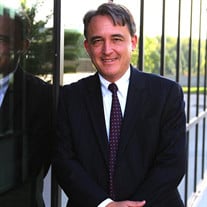 R. Christopher Lawson, 54, died on April 1, 2021. He was preceded in death by his beloved aunt, Mary Judith Moses, and his father-in-law, Dr. Don Alan Nall, both of Little Rock; and his infant son, Benjamin Wilkinson Lawson of the home. Chris was born on November 25, 1966, in Milledgeville, GA; seven months later, his family relocated to El Dorado, AR. His adventuresome spirit was evident by the time he turned 3 years old, when he made a round trip alone on foot to the neighborhood TG&Y store to purchase a pair of toy binoculars. Though it almost cost his parents matching heart attacks, his love of exploring only grew with time. Chris was reared in a home filled with music. His father, an accomplished concert pianist, taught him to play the piano and to love classical compositions. But Chris also held a special place in his heart for Rush, Yes and Metallica; much to his own surprise, he even grew an appreciation for pop and country as a DJ at local station KLBQ. A gifted communicator, Chris discovered the power of public speaking at El Dorado High School when he gave a speech on behalf of Walter Mondale during a student mock election and delivered Mondale an unexpected win. After graduating in 1985 from EHS, where he’d served as student body president, Chris entered Ouachita Baptist University in Arkadelphia as a Governor’s Scholar; he would go on to serve as president of the student senate as well as the Ouachita Student Foundation. Over a rapidly melting sundae at a student mixer in 1987, he asked Felley Nall if he could take her to dinner at notorious romantic hot spot Western Sizzlin’. Within a year, they were married. Chris graduated magna cum laude from OBU with a Bachelor of Arts degree in political science in 1989. Between hiking House Mountain and fly fishing in the Maury River, he managed to earn a Juris Doctorate in 1993 from the Washington & Lee University School of Law in Lexington, VA. After graduation, the Lawsons packed a U-Haul and returned home to Arkansas where Chris joined the Little Rock law office of Friday, Eldredge & Clark. He began his career at the Friday Firm as an associate in the public finance section, then transitioned to commercial litigation, appellate procedure, employment litigation, and the representation of public-school districts. He was named a partner in 1997. In 2004, Chris moved his practice to the firm’s Fayetteville office. A lifelong supporter of public education, he was proud to join Fayetteville Public Schools as General Counsel in July 2017. At FPS, he was depended upon daily to assist the district in navigating the intricacies of school law. He was named multiple times among “The Best Lawyers in America, Appellate Law” and was a frequent speaker on topics including appellate procedure and education law. Chris also served as an adjunct instructor at the University of Arkansas School of Law and at John Brown University. Chris was kind. He loved his family deeply, spending time with them outdoors or preparing meals for them from his own made-up recipes or simply listening and being a husband and dad. Among his many gifts, his superpower was his generous, unfailing ability to give his laser-like attention to others. He possessed a quick wit, a gentle spirit, a fantastic sense of humor and a nearly-complete Stephen King library. Chris listened way more than he spoke, and offered thoughtful opinions — but only when asked. He was a Christian and served unselfishly in the churches he attended, most recently Grace Church of Northwest Arkansas in Fayetteville. Chris was most at peace in the Ozark and Ouachita Mountains or on the Texas Gulf Coast at Crystal Beach, where he was blissfully happy hiking, fishing or just quietly thinking his thoughts. He loved Razorback sports in every kind of weather. His passion for the Boston Red Sox was unequaled in the charted universe. Chris is survived by his wife, Felley Nall Lawson, of Fayetteville; daughters Elizabeth Clary Lawson and Josephine Hall Lawson, both of Fayetteville, and Madeline Kate Lawson of Rogers; parents Roger Pearce and Jan Elizabeth (Moses) Lawson of El Dorado; brother Jonathan Mark Lawson (Martha) of Liverpool, NY; sister Cheryl Lynn Lawson (John C. Cabell, Jr.) of Waynesboro, VA; mother-in-law Judith Nall and sister- and brother-in-law Ashley Elizabeth and Dr. Robert Lloyd Stuckey, Jr., all of Little Rock; and his nephews and niece: John Aaron Lawson of San Francisco, CA.; Alexander Mark Lawson (Katie) of Syracuse, NY; Nathaniel Asher Lawson of Liverpool; Charles Pearce Cabell of Waynesboro; and Charles Wilbanks Stuckey and Sidney Elizabeth Stuckey, both of Little Rock. He is also survived by many friends and colleagues. Chris will be missed. He dedicated his life to making a difference through the study and application of the law and to supporting his family. To remember Chris, listen to a bit of classic rock, go for a long hike, catch a beautiful fish (but throw it back), and be kind to each other. A memorial service led by Chris’s friend John Ray will be held at Vesper Point at Mt. Sequoyah on Thursday, April 15 at 2:00 p.m. In lieu of flowers, please consider a gift to the Fayetteville Public Education Foundation at https://www.fayedfoundation.org/; Olivia’s Basket at https://www.oliviasbasket.org/; the Fayetteville Public Library at https://www.faylib.org/; or Canopy NWA at http://www.canopynwa.org/

R. Christopher Lawson, 54, died on April 1, 2021. He was preceded in death by his beloved aunt, Mary Judith Moses, and his father-in-law, Dr. Don Alan Nall, both of Little Rock; and his infant son, Benjamin Wilkinson Lawson of the home. Chris... View Obituary & Service Information

The family of R. Christopher Lawson created this Life Tributes page to make it easy to share your memories.

Send flowers to the Lawson family.