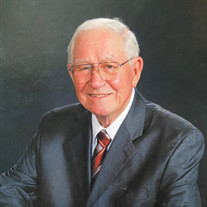 Robert Zane Goodwin passed away peacefully early Tuesday, August 17. He was born November 14, 1927, in Jones County, Texas to Sarah and Lee Hoyt Goodwin. He was preceded in death by his parents, sisters Joy and Dawn, as well as his wife Arva. He spent his early years in the Plainview Community of West Texas and attended Anson High School and graduated in 1945. He married his high school sweetheart, Arva Thomas on October 21, 1949. In 1952, the Goodwin’s moved from Texas to Springdale, Arkansas and became a banker at First State Bank and later took a position as a loan officer at Farmer’s & Merchants and retired from Federal Savings Bank in Rogers. In addition, Bob served 29 years on Rogers City Council, and helped guide the city through a period of significant growth and focused on infrastructure and building Beaver Lake. He was given the lifetime honorary member from the Rogers-Lowell Chamber of Commerce and received the key to the City of Rogers for his dedicated service. Bob was a family man, who was dedicated to community service, a deacon in his church, and loved banking. He was also an artist, musician, pilot, poet, learned Spanish late in life and was President of the Buddy Club. He leaves behind his and his three children, Randy Goodwin, Gary Goodwin, Lisa Mills, five grandchildren, Jessica Mills (Brian), Beth Bobbitt (Chris), Mandy Robinson (Barrett), Daniel Goodwin (Kerry), Skyler Mills, nine great grandchildren, and his loving wife Martha Goodwin whom he married on November 11, 2011. In addition to his previous family he loved Martha’s four daughters, Lisa Sanchez (Carlos); Wanda Leeds (Lloyd), Samantha Davis (David) and Tamara Weston and several grandchildren and great grandchildren. Visitation will be held 5:00 p.m. – 7:00 p.m. Thursday August 19, 2021, at Nelson-Berna Funeral Home Rogers. Funeral Service will be held 10:00 a.m. Friday at First Christian Church Rogers, per CDC guidelines mask are encouraged; with burial to follow at Benton County Memorial Park under the direction of Nelson-Berna Funeral Home. To leave an online condolence please visit www.bernafuneralhomes.com In lieu of flowers memorials may be mad to First Christian Church Rogers. A just man walketh in his integrity: his children are blessed after him. -Proverbs 20:7

Robert Zane Goodwin passed away peacefully early Tuesday, August 17. He was born November 14, 1927, in Jones County, Texas to Sarah and Lee Hoyt Goodwin. He was preceded in death by his parents, sisters Joy and Dawn, as well as his wife Arva.... View Obituary & Service Information

The family of Robert Zane Goodwin created this Life Tributes page to make it easy to share your memories.

Send flowers to the Goodwin family.