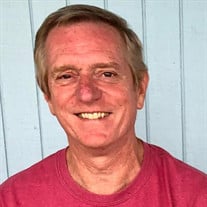 Roger Dale Jackson, age 65, passed away Monday, March 7, 2022, in Rogers, Arkansas surrounded by his loving family. He was born December 12, 1956, in Decatur, Arkansas to the late Leonard and Mary Lou (Gilbert) Jackson. Roger worked as a Pharmacist in Northwest Arkansas for 39 years before retiring in 2019. Roger was quite handy and always had a project or was helping others. He enjoyed seeing new places and creating new memories with his loving wife of 44 years, Carla (Wilmoth) Jackson. When he wasn’t exploring new places, he enjoyed spending time at Beaver Lake and rooting for the Razorbacks. Roger was happiest when he was with his beloved family and often hosted family events, always making sure to snap group photos capturing their time together. Roger’s family and friends will miss his sharp, dry wit, kindness, and level headedness. He will be sorely missed. Roger is survived by his wife, Carla Jackson. His sons, Jared Jackson with wife Amber of Rogers, and Derek Jackson with wife Mikayla of St. Paul, Minnesota. His grandchildren Aria Jackson, Oliver Jackson, and Matilda Jackson. His siblings Jayne Kooistra, and Dennis Jackson. As well as a host of extended family and friends. A visitation will be held Friday, March 11, 2022, from 4:00-6:00PM at Nelson-Berna Funeral Home of Rogers. A private funeral service and cremation is entrusted under the direction of Nelson-Berna Funeral Home of Rogers. To place an online tribute, please visit www.bernafuneralhomes.com

The family of Roger Dale Jackson created this Life Tributes page to make it easy to share your memories.

Send flowers to the Jackson family.