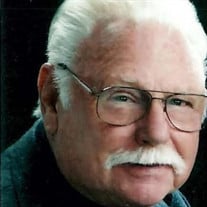 Roger Raymond Valek, 83, of Bentonville, Arkansas went to be with his Lord Jesus on Thursday, January 14, 2021. Roger was born January 1, 1938 on the Oregon Trail near Belvidere, Nebraska to Edward and Virginia Valek. He was baptized as a young boy in the Christian Church in Belvidere, Nebraska and attended church throughout his life. He grew up in Belvidere and Hastings, Nebraska and when he was nineteen, he moved to California. In 1957 he met Stephnie Vandermeulen, his wife of 63 years, in Temple City, California. They moved to Escondido, California in 1959 and lived there for 36 years. They had two children: Matthew Edward born on July 2, 1958 in Pasadena, California and Kim Frances born on May 7. 1960 in Escondido, California. Roger worked in the Automotive Industry and opened Valek’s Body and Paint Shop in 1967. He owned it for 28 years until he retired in 1995. During those years he was well respected by his employees, customers, the community, and the Automotive Industry. Roger was honest, hardworking, a loyal friend with a great sense of humor. His children will tell you he was a wonderful, loving father who taught them many things. Roger had many hobbies and interests. Flying was probably Number 1! He was an excellent pilot and flew many years in General Aviation. He owned a Swift, Cessna, Mooney, and built a R V 4 which he flew for several years. He also enjoyed boating, fishing (salt and freshwater), motorcycles and camping (from tents to motorhomes). Later in life he added woodcarving and woodturning to the list. He left many beautiful wood pieces for us to enjoy. Roger was gifted in many areas, especially mechanical. He could fix almost anything and if it needed a part he could not find, he just made it. Roger is survived by his wife of 63 years, Stephnie. A son, Matt (Jan) of Hatch, Utah, a daughter Kim (Jon) Dreyer of Bentonville. Grandchildren, Cassandra (Ryan) Moore of Springdale Jessica (Richard) Carter of Rogers, and Paul Dreyer of Gentry. Two Great-granddaughters, Natasha Joy and Anya Grace Carter. Three sisters, Jene (Bob) Rasher of Grand Island, Nebraska, Betty (Gene) Dudgeon of Hebron, Nebraska, and June Moriarty of Buffalo, Missouri and one brother, Tony (Debbie) Valek of Las Vegas, Nevada and many special nieces and nephews. Due to the pandemic a Celebration of Life for Roger will be held at a later date. To place an online tribute, please visit www.bernafuneralhomes.com

Roger Raymond Valek, 83, of Bentonville, Arkansas went to be with his Lord Jesus on Thursday, January 14, 2021. Roger was born January 1, 1938 on the Oregon Trail near Belvidere, Nebraska to Edward and Virginia Valek. He was baptized as a young... View Obituary & Service Information

The family of Roger Raymond Valek created this Life Tributes page to make it easy to share your memories.

Roger Raymond Valek, 83, of Bentonville, Arkansas went to be...

Send flowers to the Valek family.