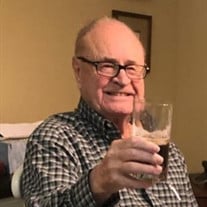 Ronald Richard Chouinard, age 87, of Bentonville, Arkansas, died on January 4, 2022, in Paris, Arkansas. He was born on March 3, 1934, in Albertville, Minnesota to Ernest and Rosella Bartel Chouinard. Ron joined the United States Army and served during the Korean War. He married Treva Thomas on April 23, 1983, in Springdale, Arkansas. Ron was a real estate broker who owned and operated Anchor Real Estate in Springdale. He was a longtime member of the Kiwanis Club of Springdale and the Knights of Columbus. He was preceded in death by his first wife of 25 years, Mary Chouinard; one son, three brothers and his parents. Ron is survived by his wife, Treva Chouinard; two sons, seven grandchildren, seven great grandchildren, six sisters, and two brothers. There will be a memorial graveside service 2:30 p.m., Friday, January 14, 2022, at Fayetteville National Cemetery. Memorials may be made to Special Olympics Arkansas, 2115 Main St., North Little Rock, AR 72114.

The family of Ronald Richard Chouinard created this Life Tributes page to make it easy to share your memories.

Send flowers to the Chouinard family.