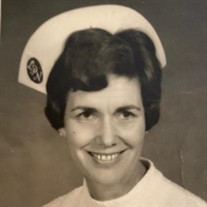 Ruth Merle (Amos) Box, 92, was born October 25, 1928, in Decatur, Arkansas to Earl and Merle (Barnes) Amos. The eldest of six children, she grew up working on her family’s farm, and she became quite the basketball star in high school. In 1946, she married John Elvin Box, Jr. She went on to pursue a more than 40-year career in nursing while raising a beautiful family. Ruth was a retired pulmonary nurse, one of the earliest employees of the Fayetteville Diagnostic Clinic. She began as an LPN and received her RN in 1985, at the age of 57. She received her nursing degree from the University of Arkansas, attending classes alongside her full-time nursing career. She loved telling the story of how she received an “A” in Golf – the only elective offered at 6:00 a.m. She proudly served patients, often after hours from home, until the age of 80. A former basketball player herself, she was a lifelong college sports fan – one of the biggest Arkansas Razorback fans ever! Next to her family, Ruth’s greatest passions were nursing and gardening. She bragged about Linda’s newest adventures, and she was always quick to share Terry’s progress as a dentist. She loved to tell people how her granddaughter Bradyn once said she was “addicted” to flowers; red geraniums were her favorite. And while she never quite understood what Amy does for a living (she would always ask, “What exactly do you do?”), she was nonetheless quick with praise. Bradyn and Amy argued for years which of them was her favorite granddaughter. Each was certain, and vocally adamant, that she was – and to that, Ruth always just laughed, never actually confirming who that might be. Ruth was wrapped in love and surrounded by family when she peacefully died on October 7, 2021, in Springdale, Arkansas. Ruth was preceded in death by her husband John, her parents, sisters Helen Florer, Elsie Carmical and Arlene Renner, and grandson Charles Christian Fairchild. She is survived by her brothers Gerald Amos and Nelson Amos, daughter Linda (Box) Kearbey of Springdale, Arkansas, son Terry G. Box of Wheeler, Arkansas, granddaughters Amy A. Fairchild and Bradyn J. Box, both of Fayetteville, Arkansas. Funeral services will be at 1:00 p.m. on Thursday, October 14, 2021, at Central United Methodist Church in Fayetteville, Arkansas. Burial will follow at Fairview Memorial Gardens in Fayetteville. In lieu of flowers, the family asks that donations be made in Ruth’s name to St. Jude Children’s Research Hospital, P.O. Box 50, Memphis TN 38101-9929 or to a charity of your choice in Ruth’s name. Arrangements are under the direction of Nelson-Berna Funeral Home and Crematory of Fayetteville, Arkansas.

Ruth Merle (Amos) Box, 92, was born October 25, 1928, in Decatur, Arkansas to Earl and Merle (Barnes) Amos. The eldest of six children, she grew up working on her family&#8217;s farm, and she became quite the basketball star in high school.... View Obituary & Service Information

The family of Ruth Merle (Amos) Box created this Life Tributes page to make it easy to share your memories.

Send flowers to the Box family.