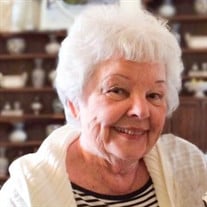 Ruth Rogers Soffos our loving and beautiful Mom and Mamaw passed away peacefully after a difficult battle with Alzheimer’s just a few days shy of her 91st birthday on December 1, 2021. Ruth Olive Rogers was born in Memphis, Tennessee on December 17, 1930, to the late Ruth Olive Wilson and Thomas Sprott Rogers and was one of 4 children. She is survived by one son, James Harry “Buddy” Soffos (Kathy), six grandchildren: Wendy Cathey (Brandt), Stacey Chandler (Jay), Ambra Soffos Jacks, Lindsay Pierce, Rebecca Rodgers (Dustin) and Cabe Soffos (Katy). As well as her eleven great-grandchildren: Grace Pierce, Kensley Soffos, Klayton Soffos, Carson Bailes, Kennedy Soffos, Samuel Rodgers, Sofia Rodgers, Pierce Cathey, Clinton Cathey, Paxton Jacks and Alexis Jacks. She was preceded in death by an infant brother, her sisters Harriet Virginia (Lane) and Elizabeth Lee (Fryer) along with her husband, James Harry Soffos and two children, Beverly Soffos Pierce, and Michael Thomas Soffos. Ruth and Jimmie married in March of 1951 in Memphis, Tennessee and in the fall of 1953 moved to Camden, Arkansas. They raised their three children, Beverly Sue, Thomas Michael, and James Harry (“Buddy”) in Camden. Their house was always filled with their kids’ friends hanging out and occasionally you could talk Ruthie and Jimmie into dancing the Jitterbug. They and stayed in Camden until 1984 when Ruth was transferred with International Paper to Pine Bluff. Just a few short months after she and Jimmie moved to Pine Bluff, he had a heart attack and passed away. In 1985 she retired from International Paper, but after having some time on her hands she decided to go back to work. She drove to Little Rock during the legislative sessions and would work in the office. She loved working at the Legislature and did so for many years. Ruth loved to cook and spend time with her family. She made the best chocolate chip cookies, German chocolate cake and homemade caramels. If you spent the night with her, you could bet that you would wake up to fresh squeezed orange juice and cream of wheat. She loved to sit by her fire in her beautiful pajamas and warm robes sipping on hot tea and maybe sneaking some Hershey’s Dark Chocolate. Ruth was so laid back and easy going and loved to travel. She took some amazing trips with one of her closest friends, Virginia Work. They traveled to many beautiful sites that she remembered well and shared with so many. She faced life with intelligence, determination and above all faith. Ruth was raised in the Christian Science Church and her faith in God is what got her through her tragic losses. She was loving, strong, and fiercely independent. After losing her husband James (“Jimmie”) of 33 years she lived alone in Pine Bluff until 2018 when she moved to Conway for a year and then to Fayetteville to be closer to one of her granddaughters. Ruth once wrote to all of us in a memoir of our family history that “Love is the healer of all ills—make sure you let Love rule in your homes and your lives.” Cremation arrangements are by Nelson Berna Funeral Home of Fayetteville, Arkansas.

Ruth Rogers Soffos our loving and beautiful Mom and Mamaw passed away peacefully after a difficult battle with Alzheimer&#8217;s just a few days shy of her 91st birthday on December 1, 2021. Ruth Olive Rogers was born in Memphis, Tennessee on... View Obituary & Service Information

The family of Ruth Rogers Soffos created this Life Tributes page to make it easy to share your memories.

Send flowers to the Soffos family.