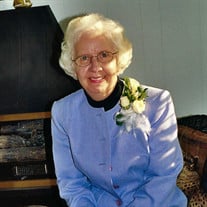 Thelma Louise Skaggs, age 82, of Bentonville died Thursday, September 9, 2021, at Mercy Hospital located in Rogers. She was born June 12, 1939, in Bentonville, the daughter of Edna Campbell and Lonas Baggett. For 18 years, Thelma worked dedicatedly as a teacher. Two years she taught in North Little Rock and the other sixteen she taught at Bentonville. Even after she retired, she continued to design the bulletin board for Robert’s Sunday school class according to the seasons and holidays. Thelma was a musical prodigy, able to play any song she heard. At the age of three, she had already begun playing for the church congregation and in the first grade, the high school choir teacher would take Thelma out of class to accompany the choir. She played for the elementary school, middle school, and district youth choirs. Above all, Thelma loved to use her musical gift to serve her Lord and Savior playing for the church until she was 80. Even after she was no longer able to play for the church, you could still hear her piano playing hymns throughout her house. Thelma was a loving and gentle soul who always had a fresh pie or banana bread in hand for anyone that stopped by. First and foremost, she was a Christian, spending her life serving her Lord and showing His love to everyone she met. Thelma was preceded in death by: her parents: Lonas and Edna Baggett, one sister; Alice Bonds, and her son; Steve Skaggs. Thelma is survived by: her husband, Robert Skaggs, whom she married December 23, 1961; her son, Stan Skaggs and his wife Fatima, of Russellville; one daughter, Stacee Freeman and her husband Neil, of Bentonville; five grandchildren, Kisha Edens and her husband Shane, Cameron Skaggs, Bryan Skaggs, Joy Skaggs and Sara Skaggs; two great grandsons, Nehemiah and Robert Edens; one brother, Carl Baggett and his wife Robbie of Rogers; one sister, Mary Baggett of Centerton; one brother-in-law, John Skaggs and his wife Jerri Lynn, of Bentonville; and numerous cousins, nieces, and nephews. A visitation will be held 2:00 p.m. – 3:00 p.m. Sunday September 12, 2021, at the Bentonville Community Church of the Nazarene with Funeral Service starting at 3:00 p.m. Burial will take place in Bentonville Cemetery under the direction of Nelson-Berna Funeral Home.

The family of Thelma Louise Skaggs created this Life Tributes page to make it easy to share your memories.

Send flowers to the Skaggs family.