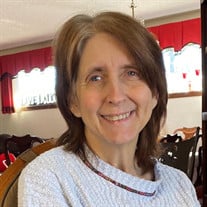 Former Sioux Falls resident Virginia (Ginny) Lee Neal passed away on February 28, 2021 in Springdale, AR. A memorial service will be held on Saturday, March 27, 2021 at Ransom Church, 700 N. Main Ave., Sioux Falls, SD. Virginia was born on April 3rd, 1955 to Cale and Alice Neal on the United States Naval base in Pensacola, FL. After several moves during her childhood the family settled in Watertown, SD where Virginia graduated from high school. She attended college at University of South Dakota in Vermillion and graduated with a bachelor’s degree in social work. After graduating, she moved to Sioux Falls, SD where she spent most of her life. She married Don Palmier, and they had two beloved children, Ryan and Jacquelyn. After working in her field for many years, Virginia went back to school to become a licensed massage therapist. After a decade of doing massage, she worked for Wal-Mart until she retired. Virginia had a great passion for books and music and loved to spend her time reading or listening to rock and roll. She enjoyed the Sioux Falls Jazz Fest and tried to attend every year. She enjoyed visiting with family and friends and taking trips to the Black Hills where her family had a cabin during her childhood. Virginia most enjoyed spending time with her five grandchildren that she cherished deeply. Virginia spent the last two years of her life living in Springdale, AR with her brother Jeffery and his wife Debbie. She is survived by her two children, Ryan Palmier and Jacquelyn Palmier Crockett; five grandchildren, Kendrick Rawls, Jacquelynn Rawls, Jarius Rawls, and Austin and Ashton Crockett; brother Jeffery Neal and his wife Debbie, sister Dawn Neal Bolt, sister Susan Oldenkamp and husband Gary, sister Christina Neal White and husband John, and numerous nieces and nephews. She is preceded in death by her parents, Cale and Alice Neal, and nephew Joshua Neal. Cremation arrangements are by Nelson Berna Funeral Home of Fayetteville, AR. Memorials are suggested to the Alzheimer’s Association.

The family of Virginia Lee Neal created this Life Tributes page to make it easy to share your memories.

Send flowers to the Neal family.