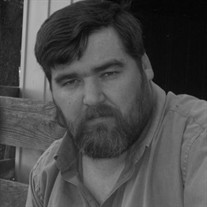 William Leroy “Bill” Black of Bella Vista, AR was born on December 6, 1970, to William “Leroy” Black and Opal Fine Black, in Libby, Montana. Bill passed away on Tuesday, October 5, 2021, in the presence of his family in Rogers, Arkansas at the age of 50 years and 10 months. Bill is preceded in death by his father, Leroy Black. Bill had a great love for operating heavy equipment which began in his sandbox in Pensacola, Oklahoma. He quickly moved from toys to the real thing when he began running the big loader for his parent's concrete plant at 8 years old. After graduating from Adair High School, he continued to work side by side with his dad for the International Union of Operating Engineers Local 627. In 1990 he met the love of his life, Jennifer, and went from building roads and bridges to building a family. After accepting Jesus as his Lord and Savior he became an ordained minister and was Pastor at His Way Christian Fellowship in Locust Grove, Oklahoma for 2 years. After that he and his young family relocated to Arkansas. They bought a home and settled permanently in Bella Vista where they remain. Bill had a lifelong love of learning which led him to have many interests. He especially loved genealogy and used his talent as great storyteller to bring to life the history of his beloved family. He was immensely proud of his Scottish heritage. Above all else, he was so proud of his family. He poured himself into doing all he could for them. From roads and bridges to churches and family he was a builder and a caretaker to the end. Bill will be greatly missed by his loving wife of 30 years, Jennifer Melissa Walker of the home, and their 3 children; Soccora Cheyanne Black, 29, of Bentonville, AR, Brandie Elisabeth Black, 22, of Bentonville, AR, and William “Connor” Black, 15, of the home; his devoted mother, Opal Black of Rogers, AR; sisters Marcia Black, Carolyn (Black) and her husband Todd Borszich, and Kelly Black. He was Uncle Billy to 3 nieces, 5 nephews and 3 great nieces. A Celebration of Life will be held on Saturday, November 6, 2021, at 11:00 AM at 18506 HWY 51B, Coweta, OK 74429. Cremation arrangements have been entrusted under the care of Nelson-Berna Funeral Home of Rogers.

The family of William Leroy "Bill" Black created this Life Tributes page to make it easy to share your memories.

Send flowers to the Black family.