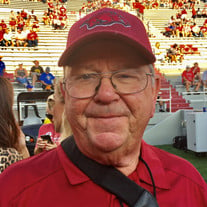 William Robert “Bob” Parks, age 73, of Fayetteville, AR, went to the arms of Jesus on July 2, 2021. He was born April 23, 1948, in Harrison, Arkansas to William Monroe and Laura Mabel Parks. He was a graduate of Mountain Home High School, University of Missouri-Rolla where he earned a Bachelor of Science in Electrical Engineering, and earned a Master of Business Administration from the University of Arkansas. He married the love of his life, Shirley Mae Bell, on December 21, 1973. Bob loved Jesus, his children and grandchildren, good food, watching the Razorbacks and vacationing. He loved to read and teach the Bible to others. He visited every S.E.C. football stadium and in addition, he traveled to all 50 states and 6 foreign countries. He was preceded in death by his father. Survivors are his wife of 47 years; his mother; his daughter, Sarah Cottle (Joel); his son, James Parks (Silvia) and four grandchildren, Esther, Isaac and Miriam Cottle and Sophie Parks. Funeral services will be held at 2:00 p.m. Tuesday, July 6, at Crossroads Community Church, 32561 Highway 295, Hindsville, AR, with Minister Charles Bell and Pastor Rocky Bell officiating. Visitation is from 5 to 7 p.m. Monday, July 5, at Nelson Berna Funeral Home in Fayetteville. Burial will be in Buckeye Cemetery. Active pallbearers are Joel Cottle, Issac Cottle, Richie Bell, Don E. McNaughton, Jake Denton and Billy Sisemore. Honorary pallbearers will be Rick Cottle, Chuck Huskey and Mark Hitt. Memorials are preferred to Gideons International, of which he was a member, P.O. Box 3022, Fayetteville, AR, 72702.

The family of William Robert "Bob" Parks created this Life Tributes page to make it easy to share your memories.

Send flowers to the Parks family.