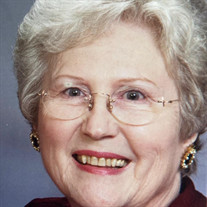 Norma Jean Waterhouse, age 92, of Rogers, Arkansas passed away Wednesday, November 3, 2021, in Rogers. She was born July 30, 1929 in Zincville, Oklahoma the daughter of John Ernest and Bessie Ethel Shaull Hudson. She was preceded in death by her parents, her adoptive father Royce Feemster, her brother Ronald Feemster, her husband Henry S. Waterhouse III, and 2 great grandchildren Savi Waterhouse and Addie Waterhouse. She grew up in Wasola, Missouri and went to John Brown University in Siloam Springs, Arkansas where she was a broadcasting student. While at JBU, she met and married her college sweetheart in 1950. She began her broadcasting career in Elkhart, Indiana as the women’s director and program hostess at radio station WCMR. She completed her bachelor’s degree at Calvary Bible College in Kansas City, Missouri and became the morning program hostess at radio station KLJC. She and her husband served in broadcasting with Wycliffe Bible Translators in Huntington Beach, California before returning to Kansas City to finish her career as sales assistant at radio station KXTR. She served in churches wherever the family lived and enjoyed sewing as a hobby. She and her husband were together for 67 years until his death in 2017. She is survived by her three children Henry S. Waterhouse IV and his wife Dona of Independence, Missouri, Jordan Waterhouse and his wife Tamie of Lowell, Arkansas, and Jean Lacy and her husband Philip of Rohrergville, Maryland; one sister Evelyn Scavuzzo and her husband Joe of Springfield, Missouri; her nephew Scot Feemster and wife Kendra and daughter Paige of Excelsior Springs, Missouri; 17 grandchildren and 15 great grandchildren. A graveside service will be held at the Missouri Veterans Cemetery in Higginsville under the direction of Nelson-Berna Funeral Home Rogers.

Norma Jean Waterhouse, age 92, of Rogers, Arkansas passed away Wednesday, November 3, 2021, in Rogers. She was born July 30, 1929 in Zincville, Oklahoma the daughter of John Ernest and Bessie Ethel Shaull Hudson. She was preceded in death by... View Obituary & Service Information

The family of Norma Jean Waterhouse created this Life Tributes page to make it easy to share your memories.

Send flowers to the Waterhouse family.